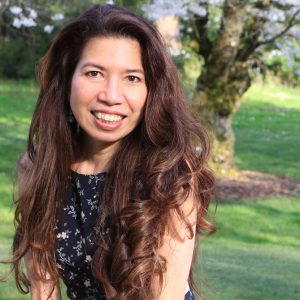 Susan Vasquez Reyes Schumacher was a fun‐loving, free‐ spirited, godly woman who loved to be around people. She was also a daughter, sister, aunt, wife and artist, who succumbed to a battle with Lung Cancer on June 8, 2017. I am her widower, Paul Schumacher, and I would like to tell you a little about Susan’s life.

Susan was born in 1961 in hospital in Naga City, Philippines. She was known as “NeNe” to her family because she was petite. Growing up, she loved singing, playing guitar and dancing with her family. Her family lived in very modest conditions in the town of Sipocot, a rural town in the province of Camarines Sur in the Philippines. There were nine siblings. Sadly, one brother became ill when very young, and Susan took care of him until his passing. Susan’s parents were both teachers, so the family was encouraged to attend college. Susan was such a gifted artist that she won a scholarship to college because of her dancing and singing abilities.

After graduating from college, Susan traveled throughout India, the Middle East and Greece with a singing and dancing troupe. She loved entertaining and later performed with her family’s rock band for several years. She also at this time started painting. After the rock band, Susan went into teaching, then went on to become a missionary. Her father then took ill and Susan cared for him until he passed. Later, she rejoined her sisters living in Manilla to work in online sales. Her boss started an import business and brought her to Los Angeles, California in the United States. The business failed after a short time and Susan realized that she had extraordinary painting skills, hand painting wall murals. Susan soon found a benefactor in Seattle, and continued painting and took painting classes too. During this time, she also became an amazing photographer. Susan was incredibly talented!

Susan lived in Seattle for almost 8 years honing her painting and photography skills. On my birthday, December 8, 2008, I met Susan on the online dating site, “Christian Café.” We got to know each other through email, phone calls and finally Skype. In the fall of 2010, I moved from Detroit to Marquette, Michigan. In 2012 I realized that I truly loved Susan and followed God’s insistence that I go to Seattle to meet her in person. In January of 2013 we met face to face, and two weeks later I asked her to marry me over Skype! She accepted and we were married on May 1, of 2013 on Lake Washington just outside of Seattle! Susan had never dated or married. She was 51 when we married and I am thankful God prompted me to meet and marry her to fulfill her lifelong dream of marriage!  We then made our home in Marquette, in the Upper Peninsula of Michigan.

Once in Marquette, Susan would spend her days at the beach while I was at work, looking for small pieces of driftwood and pebbles that were used in her artwork. She loved meeting people at the beach and while on her walks, often telling them excitedly about her new life with me, and taking pictures for memories. We would go camping to various places around the Upper Peninsula where Susan would have a chance to find more artifacts for her art. She loved the winters, and she was thrilled to learn how to make snowmen! Gardening was another passion of hers. Once we moved into the West Crescent St. home, I built a huge vegetable garden and Susan would spend hours tending it. Her love of flowers led her to plant hundreds of perennials so that every spring we would have a live bouquet of beautiful flowers.

After a time, I suggested we go to the Philippines so I could meet her family and see where Susan grew up. We went in
November of 2015, and spent 3 weeks exploring the country and meeting her friends and family. Her “Mama’s” house
had been brutalized by Typhoons, and seeing how 3rd world country citizens live was truly an eye‐opener for me. The hospitality and friendliness of her people
was remarkable. There was always lots of food, and family was ever present. However, the country had changed in the
13 years Susan was in the United States. The pollution was overwhelming, and
facemasks were necessary traveling through the cities. We had the opportunity to see many fine beaches and stayed in a wonderful resort that had been built for the crew and host of “Survivor Caramoan”! On the last day in the Philippines we were staying in a “nice” hotel in Naga City. There was no window in our room. Outside the hotel was chaos and noise like I had never seen. 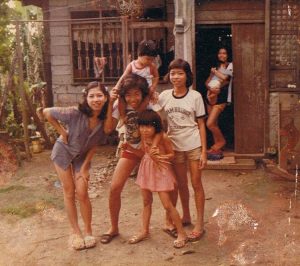 Susan, far left, in her homeland with her siblings

The pollution and bad smells were overwhelming, including a “river” that went through the city that was grey and filled with what looked like sewage. On the way back from a very good Italian restaurant, which I was thrilled to find so that we could enjoy food they serve in the U.S., Susan said to me, “Paul, I don’t think I ever want to come back to my country again. I am sad to see what it has become”. A sadness came over me to hear Susan say that. Indeed, it would be her last time in her homeland.

Before we left for the Philippines, Susan began to have a small, nagging cough. When we returned from our travels, I encouraged her to see our doctor. At first it was thought to be allergies. Then the doctor thought it could be “fixed” with an inhaler. It made no difference. After an X‐ray showed a mass in her lung, thought to be a “fungus” from gardening, they scheduled a biopsy. The doctor called on February 1, 2016, and told Susan she had advanced, Stage IV, EGFR mutation, non‐ smoker, lung cancer. We were in shock. Susan began treatments immediately. Susan refused to have the diagnosis bring her spirits down. Despite the hopeless reports from the doctors, she chose to focus on Jesus’ promises. I had built her a studio in a spare bedroom and she began to paint again and she prayed that God would bless the works of her hands. He did so, and on days that she felt good, she would pick up her brush and paint for hours on end! I was so thrilled with her art! She called it therapy painting.  Whether it was a painting, shooting photographs, making picture frames or simply filling a decorative bottle full of selected pebbles, Susan lived to create beautiful works of art. After a year and a half, Susan quietly passed away June 8, 2016, with me by her side, reading the Bible to her;

Psalm 23 as I read to Susan prior to her passing.

“The Lord is Susan’s shepherd, she lacks nothing. He makes her lie down in green pastures,

He leads Susan beside quiet waters,

He refreshes her soul. He guides Susan along the right paths for His name’s sake.

Even though she walks through the darkest valley, Susan will fear no evil,

for the Lord is with her; His rod and His staff, they comfort Susan.”

As I read that verse, her favorite, she squeezed my hands and raised her eyebrows twice, telling me she was pleased, as she could not open her eyes or speak. And comfort her the Lord did. Susan passed quietly and peacefully before I got to Psalm 29. I held her as she took her last breath in this world. She now is Joyfully in the arms of Jesus in Heaven.

The first half of this video is the 30 minute Memorial Service I held at the church Susan and I were members of. The second half is the video from the Home tab.

” When I stand before God at the end of my life, I would hope that I would not have a single bit of talent left and I could say, ‘I used everything you gave me.’ “